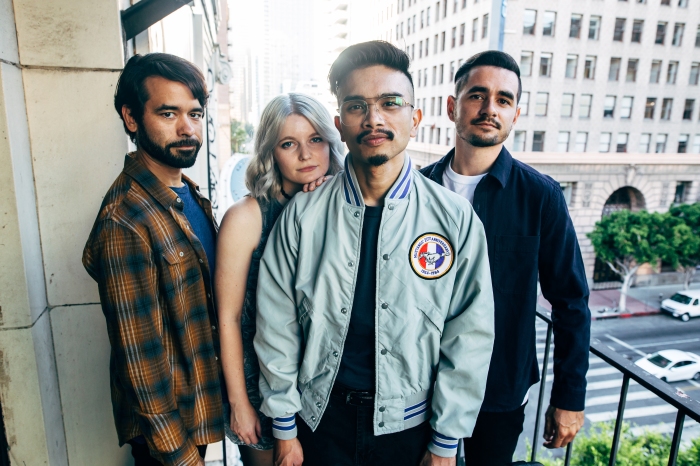 Today, LA-based post-punk quartet Cuffed Up are sharing their driving and propulsive new single “Bonnie,” as well as well as announcing their new EP Asymmetry, out on October 22nd via Royal Mountain Records. Pre-order here.

““Bonnie” is an anti-love anthem about the grief and pitfalls of a serious relationship crumbling due to lies and deceit. This is explored through the eyes of Bonnie (of Bonnie & Clyde fame), in an alternative universe where Clyde selfishly leaves Bonnie for dead. Bonnie is arrested and she decides to give Clyde up to the cops out of pure spite. Not because he left her in a dangerous situation — purely because of the end of their romantic, albeit toxic relationship.” With a video directed by Torrefranca (an award-winning filmmaker outside of Cuffed Up), it stars himself and Jewell in a role-reversal swapping the roles of Bonnie and Clyde.

For Asymmetry, Cuffed Up paired up with producer Brad Wood (Touché Amoré, Smashing Pumpkins, Liz Phair) spending a week honing the songs through experimentation with sounds and ideas and the result is a collaborative effort that tackles one’s own mortality, abandonment in relationships and reckoning with shame.

Cohesive yet expansive, soaring yet direct, Asymmetry draws lines across the globe to the burgeoning post-punk scene in the UK, while also leaning into ‘90s indie rock and grunge, a loud and rhythmic rainbow of post-punk that is fluid and versatile. Whether it’s the aforementioned “Bonnie”, Torrefranca’s brutal reckoning with his own health struggles on “Terminal”, the inventive freeform of Jewell’s guitars in “Canaries” or Ordonez and Liptock’s fidgeting and dexterous rhythms in “One By One”, Asymmetry is a line in the sand for Cuffed Up, a declaration of intent from the young band who are poised to breakout from their West Coast home.

Darting between chaotic sounds that were found all over the likes of Squid’s debut and blissful melancholy, Cuffed Up create a sound that juxtapose’s beauty with destruction. As the driving groove propels the track along and the guitars screech you can’t help but be encapsulated by the bands tumultuous sound.

The band explains that ““Canaries” is about going down a path that you know is wrong but you keep going because some form of shame is driving you. You’ve put warnings in place, but ignore them when they alert you of danger. Sometimes we become numb to the burdens we carry – “carrying the weight of stones/with pins to his bones” – like the sensation of needles when you cut off circulation. Eventually, we need to come to the realization that “truth is heavier than lies”, that it’s easier to roll over than fight your way out. In order to dig yourself out, you need to be vulnerable with yourself or else you’re just blindly accepting fate as is.“